Why I'm Writing This

It begins each morning, the day awaits and we need to cross that threshold from our much needed sleep to putting our legs beside our bedsides and getting up. I and 85% of people, according to researchers, rely on an alarm clock to wake up. I and, the majority of people according to researchers, press snooze at least once before taking the plunge and moving towards getting out of bed. Sometimes, I’ll sleep through multiple alarms. Sometimes, I’ll get enough sleep, some nights, I won’t. The fact of life is:

"No matter how disciplined you are, life will always throw you curveballs"

For nights when a curveball hits, like having a work task go much longer than expected, I still need a way to wake up regardless. So I created a trifecta, that removes any excuses for sleeping through an alarm clock.

Whether it’s radar, circuit, illuminate or so on, those electronic bells have become our morning hymns. They might startle you or maybe even excite you but there’s no denying that there are days where we can totally miss them. When I only used my smartphone to wake me up, about once a week (usually after a restless night) I would miss the sound of my alarm or instinctively hit snooze and would wake up later than I needed to. I should note that when I do sleep through the alarm, I still made it to work on time however, I did cost myself a morning workout or a prayer session. Having a morning routine (which we will talk about later on) can be a pivotal move to making our whole day that much more productive, so wrestling with our alarms in the morning can hinder our morning’s effect.

I used to live in Manhattan and along with its bustling businesses, vibrant nightlife and its natural opportunities there comes a lot of noise that doesn’t turn off. Not to mention, many of us are living with roommates to deduct our costs, and roommates can add to that noise. That’s the price many young professionals, coders and entrepreneurs pay to live in the big cities and if you’re like me and haven’t been able to drown out the nighttime sounds you might be sleeping with earplugs.

That’s why I decided to add an alternative form of an alarm clock to my mornings.

^ I like to use this alarm clock for sound because it automatically turns off after 30 seconds. Details here

Naturally, I went to the next logical step to waking up - Instead of a sound, a physical movement could help me wake up. I took a quite intense route after I read a post on reddit and bought this Sonic Bomb Dual Extra Loud Alarm Clock with Bed Shaker off of amazon. This worked great for me for some time, as it shakes on your bed and the vibrations are strong enough to wake one up. So, if you struggle with sound alarm clocks, definitely try a vibrating one. 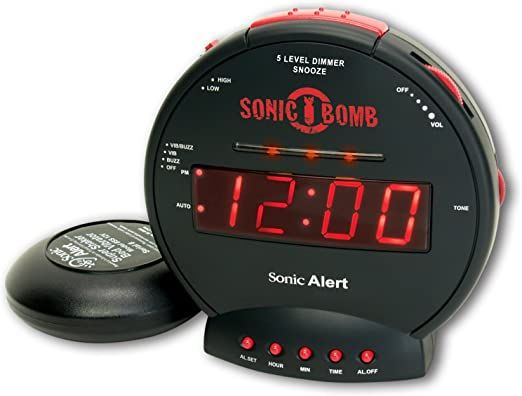 However, the body is quite powerful in its ability to adapt, and lucky for me, my adaptation skills are on point. After some time with the Sonic Bomb, I managed to sleep through their literal earthquakes some mornings. If I had to pinpoint why this was occurring, I would say that, it was such an intense way for me to wake up it actually was somehow turning me into a deeper sleeper. Studies show that harsh alarms can actually send a surge of stress hormones through your body, and if you have not slept well, it can make waking up even worse.

So finding the right alarm will require some self reflection and analysis of your personal habits and preferences. So, after testing out sound and vibration alarm clocks, my journey intuitively left me to light-based alarm clocks.

When thinking about my 5 senses, vision seemed the most pleasant and thought an alarm clock that tugged at my seeing may work. So, I did the usual amazon search for light-based alarm clocks and came across the Philips SmartSleep Light Therapy Alarm Clock.

This is when the magic started happening. The alarm clock gradually lights up the room in a way that reflects the sunrise. The light is soft and the idea is to feel like I am waking up naturally, even though I chose the time for this artificial sunrise to happen. The reason why this method was most effective can be supported by science as research says sunlight taps into our body’s innate biorhythms. According to the National Sleep Foundation, sunlight signals our brain to raise our body temperature and cortisol levels helping the body prepare for wakefulness. I have found this to be true for me, and even though I sometimes still use my smartphone or my earthquake-isque from time to time, my favorite is by far my light-based alarm.

The Holy Grail of Sleep

Alarm clocks need to work even when we are running on 4 hours of sleep because we have obligations. Of course, on days where we need a self check-up or a mental health day, sleeping in and hitting snooze is necessary but days that we must get up, even after a restless night, requires assistance. If we remain in bed, we can only blame ourselves, but if we do get up even when our bodies want to say no, it will allow us to pull off some pretty superhuman feats one day.

Razroo takes pride in it's Angular newsletter, and we really pour heart and soul into it. Pass along your e-mail to recieve it in the mail. Our commitment, is to keep you up to date with the latest in Angular, so you don't have to.